Miracle on 42nd Street, the feature documentary I wrote with Steve Ryfle (Bringing Godzilla Down to Size: The Art of Japanese Special Effects), was named Best Documentary at the 2020 New York Emmy Awards. 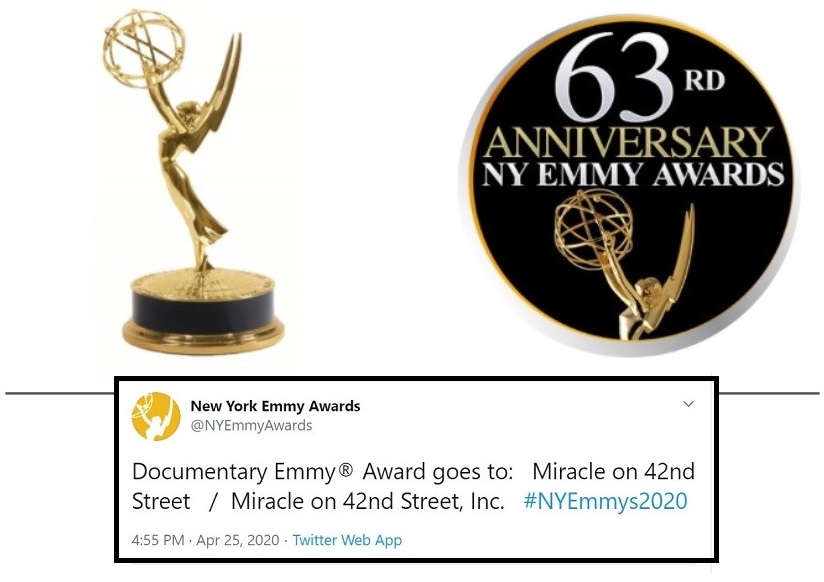 Owing to the pandemic, there was no gala ceremony. But it was a thrill for real to see the film nominated, and, indeed, it was an even bigger thrill to hear it named winner via livestream.

The Miracle team includes Oscar-nominated director Alice Elliott (The Collector of Bedford Street) and executive producer Ken Aguado (An Interview with God), and it was the biggest thrill of all to be part of that group.

Miracle on 42nd Street, which premiered on the New York PBS station, WNET, and screened at the United Nations earlier this year, is about Manhattan Plaza, the New York City affordable-housing community for artists that rose from the bleak Hell’s Kitchen of the 1970s. Its story about economic hard times seems especially timely. Hopefully, some of its proposed solutions will seem of the moment, too.

Miracle on 42nd Street, the PBS-aired documentary that I co-wrote, will be available in late February for streaming purchase on Amazon, iTunes and Google Play. Fans of physical media, please note that DVDs will be available in just a matter of days via Amazon. Truly, we live in an age of wonder. 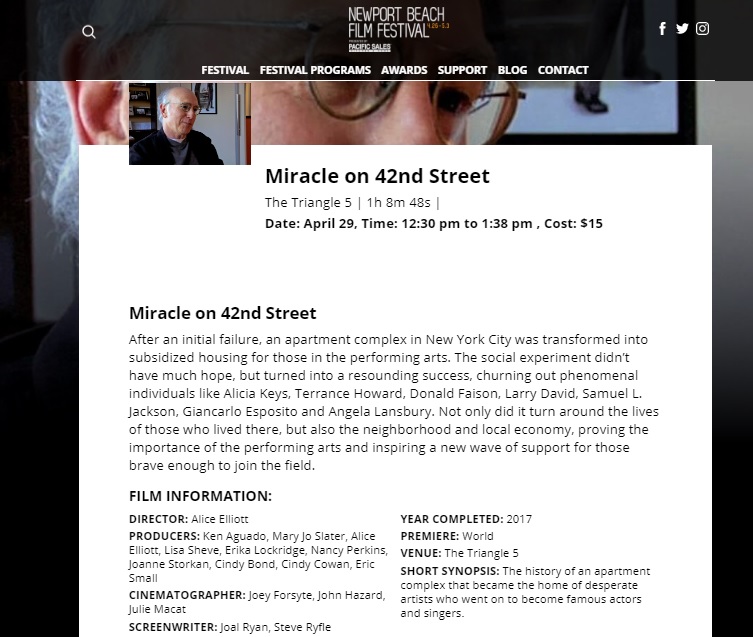 Miracle on 42nd Street, the doc on subsidized housing, artist communities and the origin story of Seinfeld that I co-wrote with Steve Ryfle, will screen April 29 as part of the Newport Beach Film Festival. Tickets, as they say, are now on sale.

So, yes, it’s true: I’m a tabloid figure and a sellout.

And it’s all pretty cool, actually.

Miracle on 42nd Street, the documentary feature I co-wrote with Steve Ryfle, got New York Post coverage, and sold out its Saturday premiere at Doc NYC in Manhattan.

What a busy summer it was for Miracle on 42nd Street.

The documentary was completed. The official Website was relaunched. The teaser poster was rolled out.

Miracle, which I co-wrote, is about Manhattan Plaza, the affordable-housing community for artists in New York City. The complex was born of the Big Apple’s mid-1970s financial crisis, and opened during the Bronx Is Burning summer of 1977. So, yes, there’s a lot of cool footage in Miracle — and a lot of cool stories from the likes of Larry David (an early Manhattan Plaza resident) and Samuel L. Jackson (a Manhattan Plaza security guard during the ’77 blackout).