You can read the story on Yahoo! And then you should go back and watch season three’s “The Grown-Ups,” followed by season six’s “In Care Of.”

As Mr. Spock would say, “Fascinating.” 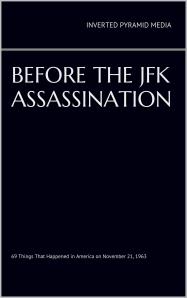 According to family lore and/or the way I’ve understood family lore, my father’s brother Phillie (short for Phillip) was struck and killed by a car in Washington, D.C., on Nov. 21, 1963, the day before the assassination of President John F. Kennedy. As a child, I believed that this meant that my Uncle Phillie, who died before I was born, was somehow a victim of the wide-ranging conspiracy to harm the President. Cutting to the chase, I no longer believe in a wide-ranging conspiracy, and I’ve been unable to confirm via Social Security death records that my uncle died on the day before the assassination.

But that nonetheless is my day before the JFK assassination story.

Before the JFK Assassination: 69 Things That Happened in America on November 21, 1963 is the latest e-book from Inverted Pyramid. As publisher, I assure you everything listed in there actually did happen. I’m pretty sure.